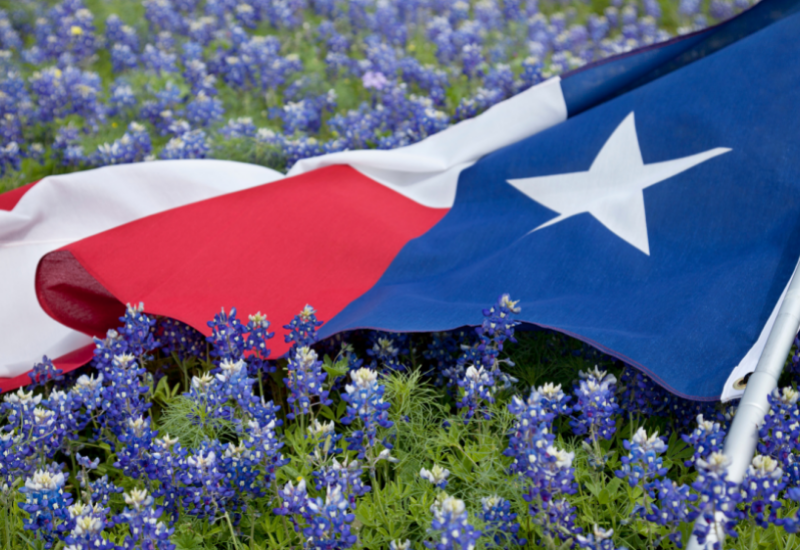 Scientifically named Lupinus texensis, the bluebonnet is the official flower of Texas and was adopted by the Texas state legislature in 1901. Also known as the buffalo clover, wolf flower, and “el conejo” (“rabbit” in Spanish), the vibrant sapphire blue petals are said to resemble the bonnets worn by pioneer women to shield them from the sun.

Bluebonnets bloom in the fall and spike in mid-April and can be seen flowering in fields and along sides of the roads across central and south Texas. They're easy to detect since their cores are usually covered with white or yellow spikes, and the flower can reach a height of around 12 inches tall. Rather than removing the flowers, officials began to preserve them, and the Texas Department of Transportation now purchases and sows over 30,000 pounds of wildflowers each year!

The origins of the Bluebonnet are shrouded in mysteries, folklore, and strange legends, yet the flower is still one of Texas' most adored and recognizable icons. The ability of the plant to return year after year, despite soil and weather conditions, is indicative of the tenacious people that live in Texas.

After a contentious flower battle in 1901, the National Society of Colonial Dames of America persuaded the Texas legislature to designate the bluebonnet after the many heroic Texas pioneer women.

The Lupinus Texensic and Lupinus Subcarnosis species of Bluebonnets are only found in Texas, but it is not the only state where they can be found. Because the flowers require 8-10 hours of sunlight per day, alkaline soils, and little moisture, they may be found in Florida, Louisiana, and Oklahoma.

If Bluebonnets aren't native to your area, don't worry; you can get bluebonnet transplants at your local nursery. Native plants consume less water, don't require rich soil, and don't require a lot of maintenance, so adding these annuals to your landscape is simple and useful. Make sure they get plenty of sunlight and don't water them until they're absolutely dry. If you're lucky, they'll return to your garden even more bright next spring! The bees and butterflies will appreciate you!

Each year, the Official State of Texas Bluebonnet Festival is held in Chappell Hill, Texas, which is famed for its beautiful wildflowers. Another classic is Burnet, Texas' Bluebonnet Capital, which lies 60 miles northwest of Austin and straight west of Georgetown along Highway 29.

Dr. Pepper was invented in Texas in 1885

Dr. Pepper was created in Waco by Charles Alderton and was first nationally marketed in 1904. You can even visit the official Dr. Pepper Museum right in Waco!

Texas is larger than any country in Europe.

The slogan was coined by Looney Tunes animator Tex Avery, who attended North Dallas High School. Later, he explained that he didn't think much of it because it was a frequent expression in his hometown.

The Texas flag’s designer is unknown.

Dr. Charles B. Stewart drew an early version of the Lone Star flag, but no one knows who designed it. When the flag was approved by statute, Stewart's drawing was used, although the genesis of the design is still unknown.

Interested in learning about other states and their official flowers? Check out our Florida Orange Blossom blog!