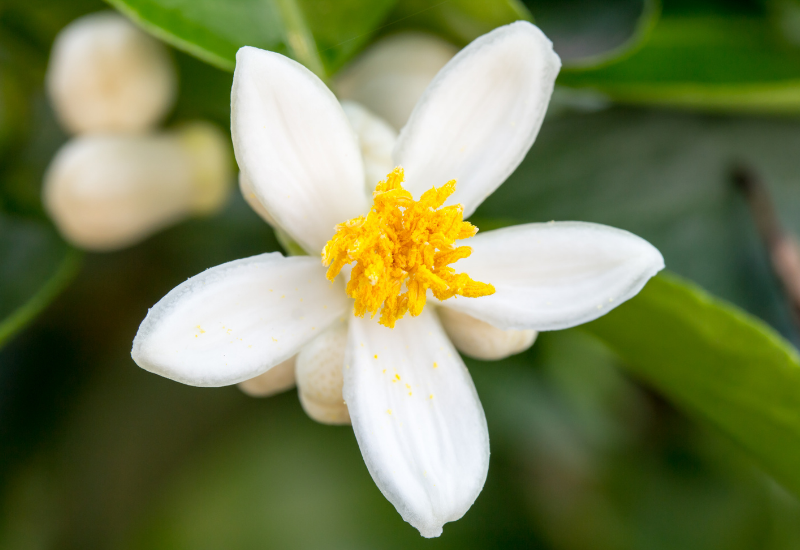 With the upcoming FSFA 100 year convention, we wanted to pay homage to Florida's state flower, the Orange Blossom!

Florida's picturesque scenery makes it a popular retirement destination as well as a top-rated family and tourism destination. The weather is warm, and there are numerous attributes to enjoy, including citrus, seafood, key lime pie, and tourist sites. Beaches, theme parks, natural scenery, and orange groves are all well-known in Florida. The Florida Everglades, which are located on the East Coast, are noted for their natural splendor. Because of its plentiful sunshine and relatively milder subtropical temperature, it is known mainly as the Sunshine State.

The orange tree's blossom is one of Florida's most fragrant flowers. During orange blossom season, central and southern Florida's air is perfumed by millions of white flowers from orange trees. The orange is also the official state fruit, and orange juice is the official state beverage of Florida. Orange Blossoms being the state flower has contributed to the splendor and charm of Florida.

Early Spanish explorers planted the earliest orange trees in the 1500s at St. Augustine, Florida, by early Spanish explorers (most likely Ponce de Leon). After the Civil War, citrus growers were able to move their products across the country, allowing commercial manufacturing to begin nearly 300 years later. Freezes in 1894 and 1895 wiped out much of Florida's citrus crop. Not to be defeated, several citrus growers relocated to the south and resumed production. Within 15 years, the sector had recovered, and by 1950, more than 100 million boxes of citrus had been harvested. In 1970, that number had risen to 200 million. Although Polk County in Central Florida is the state's top citrus-producing county, most citrus is now cultivated in the southern two-thirds of the Florida peninsula, where the lowest risk of freezing temperatures.

In 1909, the orange blossom (Citrus sinensis) was named Florida's state flower. The orange blossom is extremely fragrant and has long been connected with good fortune. It's been used in bridal bouquets and head wreaths for a long time.

Orange blossom petals can be converted into "orange blossom water" or "orange flower water," a gently citrus-scented variation of rosewater. It's a common ingredient in pastries and baked products in French and Middle Eastern cuisines.

Florida's economy is based on citrus fruit, particularly oranges. The majority of citrus fruit grown in the United States is grown in Florida (in 2006, 67 percent of all citrus, 74 percent of oranges, 58 percent of tangerines, and 54 percent of grapefruit). Approximately 95% of the state's commercial orange production is processed (mostly as orange juice).

Orange blossom honey (also known as citrus honey) is made by placing beehives in citrus groves when the trees are in bloom. Bees also pollinate planted citrus varieties using this technique. This honey has an orangey flavor and is highly sought after.

The Coreopsis flower (Tickseed) was recognized as Florida's official wildflower in 1991. The vibrant flowers were widely employed in Florida's roadside plantings and highway beautification efforts, prompting the state government to make this classification. The coreopsis comes in a wide range of colors, from golden to pink. There are several native tickseed species to Florida, though many species are widely planted in highway beautification and roadsides.

The sabal palmetto is a Florida native that has long been used as a landscaping plant and a food source; the hearts of the palm are the tree's buds. The palm is most widely spread throughout Florida. Cuba, the Bahamas, and the beaches of Georgia and the Carolinas are also home to this species. It's also known as Cabbage Palm because it's the source of swamp cabbage (palm hearts); harvesting the tree destroys it. The sabal palm was required to replace the cocoa palm in the state seal by the legislature in 1970.

We are excited to celebrate 100 years with FSFA at their annual convention from August 27 - 29, 2021 in Weston, Florida! Their goal: to cultivate friendly relationships, promote mutual understanding and foster the solidarity of all members, promote the interests of, and educate members and the public in the floral industry.

Florida has the most golf courses of any state in America

Florida's official state reptile is - you probably guessed it - the alligator!

St. Augustine, settled by Europeans in 1565, is commonly called the nation's oldest city.