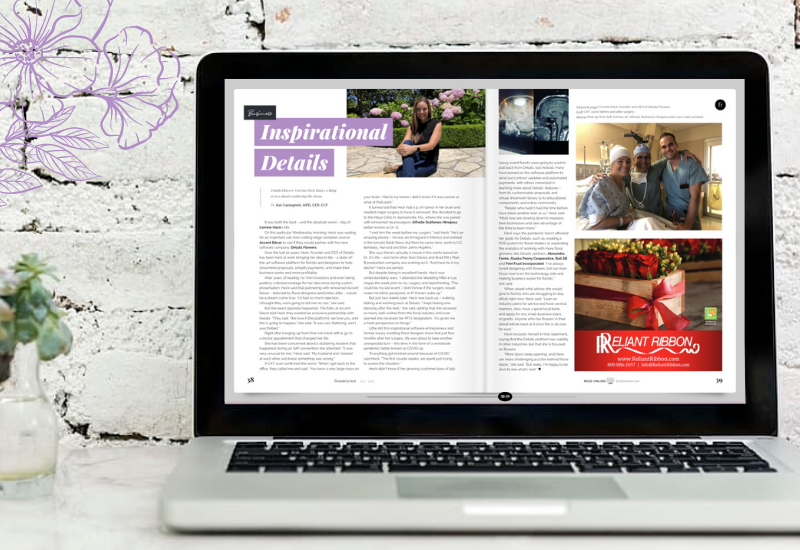 We are so excited to announce that our Founder & CEO, Corrine Heck, was featured in the July 2020 Edition of Florist’s Review magazine. The past year has been a whirlwind of different obstacles to overcome, and that’s not just including the recent pandemic, so we were thrilled when Florist’s Review reached out about sharing her inspiring story. You can read the full article below!

Details Flowers’ Corrine Heck knows a thing or two about weathering the storm. 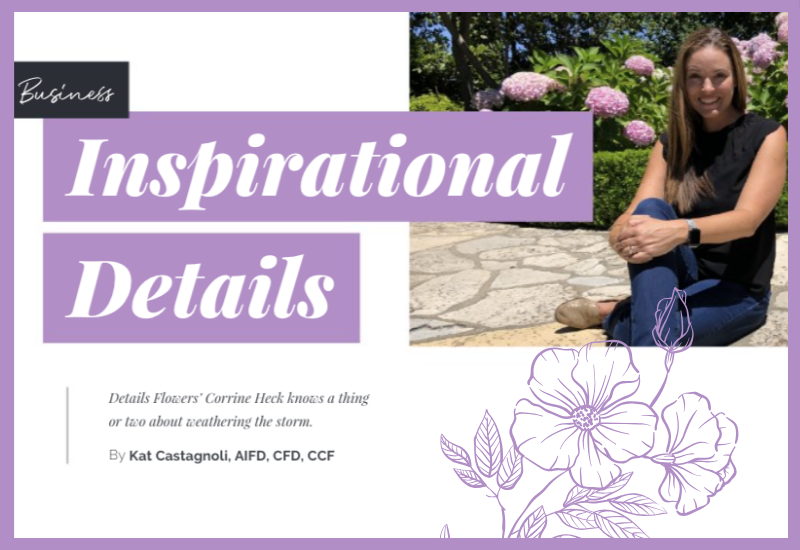 It was both the best - and the absolute worst - day of Corrine Heck’s life.

On this particular Wednesday morning, Heck was waiting for an important call from cutting-edge container source Accent Decor to see if they would partner with her new software company, Details Flowers.

Over the last 10 years, Heck, founder and CEO of Details, has been hard at work bringing her idea to life - a state-of-the-art software platform for florists and designers to help streamline proposals, simplify payments, and make their business easier and more profitable.

After years of hearing ‘no’ from investors and even being publicly criticized onstage for her idea once during a pitch presentation. Heck said that partnering with renowned Accent Decor - beloved by floral designers and brides alike - would be a dream come true. “I’d had so much rejection, I thought they were going to tell me no, too.” she said.

But the exact opposite happened The folks at Accent Decor told Heck they wanted an exclusive partnership with Details. “They said, ‘We love it [the platform], we love you, and this is going to happen.” she said. “It was very flattering, and I was thrilled.”

Right after hanging up from that call, Heck left to go to a doctor appointment that changed her life.

She had been concerned about a stuttering incident that happened during an SAF convention she attended “It was very unusual for me.” Heck said. “My husband and I looked at each other and knew something was wrong.”

A CAT scan confirmed the worst. “When I got back to the office, they called me and said, ‘You have a very large mass on your brain.’ I fell to my knees. I didn’t know if it was cancer or what at that point.”

It turned out that Heck had a 5 cm tumor in her brain and needed major surgery to have it removed. She decided to go to the Mayo Clinic in Jacksonville, Fla., where she was paired with renowned neurosurgeon Alfred Quinones-Hinojosa, better known as Dr. Q.

“I met him the week before my surgery,” said Heck. “He’s an amazing doctor - he was an immigrant in Mexico and worked in the tomato fields there, but then he came here, went to U.C. Berkeley, Harvard and then Johns Hopkins.”

She says there’s actually a movie in the works based on Dr. Q’s life - and none other than Disney and Brad Pitt’s Plan B production company are working on it. “And here he is my doctor!” Heck exclaimed.

But despite being in excellent hands, Heck was understandably wary. “I attended the Wedding MBA in Las Vegas the week prior to my surgery and kept thinking, ‘This could be my last event.’ I didn’t know if the surgery would make me blind, paralyzed, or if I’d even wake up.”

But just two weeks later, Heck was back up - walking, talking, and working back at Details. “I kept feeling one blessing after the next,” she said, adding that she received so many well-wishes from the floral industry and even learned she received her PFCI designation. “It’s given me a fresh perspective on things.”

Little did this inspirational software entrepreneur and former luxury wedding floral designer know that just four months after her surgery, life was about to take another unexpected turn - this time in the form of a worldwide pandemic better known as COVID-19/

“Everything got twisted around because of COVID.” said Heck. “The first couple of weeks we spent just trying to assess the situation.”

Heck didn’t know if her growing customer base of 550 luxury event florists were going to want to pull back from Details, but instead, many have leaned on the software platform to send out contract updates and automated payments, with others interested in learning more about Details’ features - from its customizable proposals and virtual showroom library to its educational components and online community.

“People who hadn’t had the time before have taken another look at us,” Heck said. “Most now are slowing down to reassess their business and take advantage of the time to learn more.”

Heck says the pandemic hasn’t affected her goals for Details, such as creating a POS system for floral retailers or expanding the analytics of working with more floral growers, like Details’ partners, Alexandra Farms, Alaska Peony Cooperative, Ball SB and FernTrust Incorporated. “I’ve always loved designing with flowers, but our main focus now is on the technology side and making business easier for florists,” she said.

When asked what advice she would give to florists who are struggling to stay afloat right now, Heck said, “Lean on industry peers for advice and have several mentors. Also, have a good local bank, and apply for any small-business loans or grants. Anyone who has flowers in their blood will be back at it once this is all over, for sure.”

Heck includes herself in that statement, saying that the Details platform has viability in other industries but that she is focused on flowers.

“More doors keep opening, and there are more challenging puzzles behind those doors,” she said. “But really, I’m happy to be alive to see what’s next.”