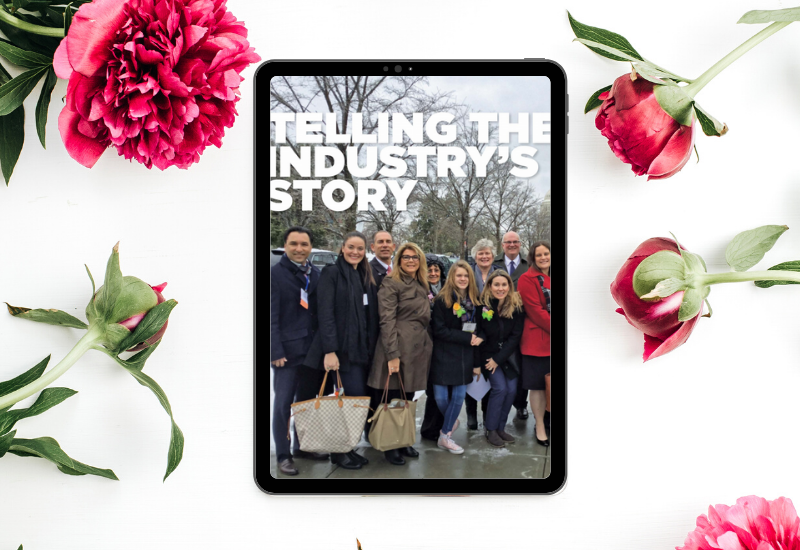 Details Founder & CEO joined other industry leaders for the first time in The Society of American Florists' Congressional Action Days! Learn more about their experience in the article below.

Neither the threat of snow nor extreme partisanship could keep SAF members from advocating for the floral industry.

When 119 growers, wholesalers, retailers and suppliers gathered March 13-14 in Washington D.C., for SAF's 37th Annual Congressional Action Days (CAD), they received some straightforward advice on meeting with lawmakers and legislative aides: Tell your story. It can make a real difference.

For Liza Roeser Atwood of Fifty Flowers in Boise, Idaho, putting that advice into practice was easy.

Earlier this year, she and her team were forced to turn away orders after they failed to find laborers to help them harvest seeded eucalyptus. So when Atwood joined with the other members of the Idaho delegation, she used that story to illustrate the industry's critical need for practical solutions to the country's current, broken immigration system - and her story hit home.

"That really opened their eyes that there is a crisis," said Atwood, a longtime floral industry member but first-time CAD attendee who said she was motivated this year to attend because she wanted to help effect lasting change. "I'm here talking with the lawmakers who when they get to the floor can stand up and vote for our business, to keep it in business."

Despite the threat of a major snowstorm, CAD drew its largest crowd in more than a decade, with 35 first-time attendees and a total delegation representing 30 states. Many SAF members who traveled to Capitol Hill on March 14 to meet with lawmakers and key staff members said they found people to be more receptive this year to the industry's issues - tax reform, immigration reform and increased funding for the Floriculture and Nursery Research Initiative (FNRI). Some credited that change to the new administration; others said the possibility of snow, which threatened the D.C. area but ended up hitting harder farther north, helped clear the halls of Congress, giving aides and lawmakers a little more time to spend in meetings.

"I found people were looking for information - they were very interested," said Paul Fowle of DVFlora in Miami, Florida.

Indeed, minutes after he and New Jersey delegation left one representative's office, they received an email from aide, reminding them to send follow-up information on FNRI, and why the floral industry need the government's help in bringing that private=public initiative back to its previous funding levels.

Paul Brockway, AAF, of Conklyn's Florist in Alexandria, Virginia, noted that the pre-meeting prep from SAF experts helped his group feel ready to meet with lawmakers and staff. He was pleasantly surprised to find staff members who were informed and ready to listen.

"Turns out that the staffers were well aware of the issues, leaving us ample time to tell our stories and explain how our positions affect the industry, our state and the future of the world as we know it." he said.

Nancy Hooper of Norton's Flowers & Gifts in Ypsilanti, Michigan, a fourth-time CAD attendee, also noted a shift in reception on the Hill this year.

"Previously, it seemed we would always get 'no,'" she said. "[Lawmakers and staff] would agree but always tell us, 'It's impossible.' For the most part this year, we saw a lot of agreement and support."

"This year we had a lot more access and they were a lot more receptive, taking more notes," he explained. "We just got a lot more time with them."

Alan Tanyoue of Florallife in Walterboro, South Carolina, said he too found "receptive" audiences in his lawmakers' offices, including that of Sen. Lindsey Graham (R - S.C.) where a counsel to the senator reaffirmed the legislator's commitment to comprehensive immigration reform. (This year, the SAF delegation lobbied specifically for fixes to the troubled E-Verify system.)

Longtime CAD participant David Armellini of Armellini Express Lines in Palm City, Florida, helped guide the Florida delegation in its discussions of the industry's effort to exclude imported floral agriculture products from a border adjustment tax, an issue that could have a "huge impact" on the Sunshine State, he said.

"We don't want to see flowers priced out of the market," he said, as the state group prepped for its meetings before heading to Congress. "We're prepared to walk on to the Hill and state our case."

Another member of the Florida delegation, Corrine Heck of Details Flowers in Ormond Beach, said she found it helpful to have experienced CAD participants like Armellini in the group, as she, a first-timer, learned the ins and outs of lobbying from SAF and Beltway experts and other industry members.

"I learned so much from the veterans from my state," she said. "I had many great takeaways, talked to so many wonderful business owners and really feel that it was a positive experience."

First-time attendees (and mother-daughter duo) Sue and Nicole Palazzo of City Line Florist in Trumbull, Connecticut, picked up a handy tip from SAF Chairman Shirley Lyons, AAF, PFCI, of Dandelions's Flowers & Gifts in Eugene, Oregon: Stop by all of your lawmakers' offices, even if you don't have an appointment. That approach -and a real hometown connection - paid off when they stopped by the office of Rep. Jim Himes (D-Conn.) and Nicole noted that one of the staff members there was a customer of the shop. The mention got them a little unexpected face time.

"Big or small shops, we are all affected in one way or another with the issues that go on," said Nicole, adding that she plans to become a regular of the event.

Jeremy Lohman of Scott's House of Flowers in Lawton, Oklahoma, another first-time attendee, admitted that he was skeptical at first, unsure if CAD would be worth time away from the business.

"I initially thought I could not make a difference but after attending [CAD], I realize I can," he said, adding that he found conversations among industry members, who represented all segments of the supply chain, as beneficial as Capitol Hill meetings. "I was able to meet a variety of people in the industry and broaden my scope of knowledge."

First-timer Larry White, who has worked at Smithers-Oasis for 19 years, called CAD event "bucket-list" item - a chance to "come to D.C. and actually participate...in our legislative process."

That message is likely music to the ears of Karen Fountain, AAF, of Flowers 'n' Ferns in Burke, Virginia, who has been attending CAD for decades and recently wrote an impassioned Viewpoint in Floral Management on the importance of CAD.

"it's necessary for our senators and representatives to hear our stories about our businesses," Fountain said. "By going to Capitol Hill year after year, we establish ourselves as a leading association who takes pride in our industry. We gain their trust, which allows for more dialog by our SAF staff throughout the year."

And, for all the headlines about how contentious Washington has become, several CAD members who came to the event said they found moments of real inspiration, and even joy. That was the case for Paul Fowle, of Delaware Valley Floral Group, who happened upon a 100-person group representing Baptist churches across the country singing patriotic songs on the steps of the Supreme Court.

"I'll file that under 'something you don't see every day,'" he laughed. "It was a special memory from the trip."