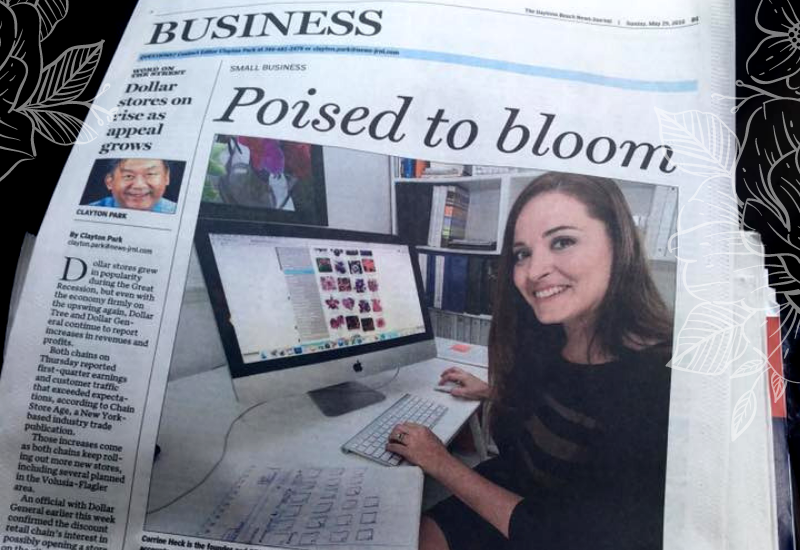 ORMOND BEACH — Corrine Heck has been involved in the floral industry as far back as she can remember.

As a child, she sold flowers at farmers markets that were grown at Bill Brown's Greenhouses, her family's Apopka nursery.

She and her husband Gregory started a business of their own 13 years ago, Boutique Floral & Photography Studio.

The business which began in a storefront on Seabreeze Boulevard in Daytona Beach is now run from the couple's Ormond Beach home. It provides floral arrangements, photography and planning services for weddings and special events.

Over the years, Heck said she came to the realization that there was a need for a software program that could specifically help florists and special event planners keep track of clients' orders and requests as well as monitor inventory and the status of deliveries.

Not knowing of an existing software program that could do all that, she decided to create one herself.

She launched Details Flowers in 2014 to focus on developing that software.

That same year she also applied and got accepted as a client of the Volusia County-funded UCF Business Incubator at Daytona Beach International Airport.

After going live with her subscription-based DetailsFlowers.com service a year ago, Heck today has 47 clients throughout the country.

Deciding her startup was ready to stand on its own, Heck in January decided to graduate from the incubator, where she had an office space. For now, she is running Details Flowers out of her and her husband's Ormond Beach home.

In addition to her home office, Heck operates a small office in Winter Park where she employs an Information Technology professional and a chief marketing officer. She also has six student interns.

Her plan to grow Details Flowers got an additional boost in March when Heck won a venture plan competition for startups put on by the Rollins College Crummer Graduate School of Business.

The first-place prize she received was $25,000 in cash with an option to receive an additional $25,000 in equity funding from venVelo, a Winter Park-based venture capital firm.

Heck said she is in talks with venVelo about securing that additional funding.

“We have not yet invested in Details Flowers, but hope and plan to later this year,” said Allen Kupetz, venVelo’s chief operating officer. “Speaking for myself, I found (Heck) to have deep domain expertise and passion for her business.”

Said Heck: “There are 35,000 florists in the U.S. We can’t get them all, but that’s the potential. I see us (growing to) 100 to 200 employees managing accounts, linking wholesale flower distributors with florists, knowing what products to order, finding specialty sources and refining the event process from beginning to end.”

Details Flowers' website includes a floral section that allows wedding and special event planners to view and pick from 700 types of flowers. It also includes “recipes” for flower bouquets and allows clients to see how much the different options would cost them. The site also has sections that provide similar services regarding other aspects of special event planning, including furniture, linens, china, flatware and glasses.

“Writing the contract would take hours just by itself,” Heck said of the aspects of putting on a wedding or special event. “This platform does it all in minutes.”

Heck said she applied to become an incubator client because she knew she needed help in how to develop and grow her new venture.

Early assistance came from William Andrews, a business professor who is chairman of the department of international business at Stetson University in DeLand.

They met at a wedding Heck was managing. Andrews offered the help of his graduate assistants who were looking for a class project.

When Heck became a client of the incubator in July 2014, she attended classes and received advice from mentors on fine-tuning her pitches to potential investors.

“Little by little, Corrine gained confidence and got the attention and the business grew,” said Connie Bernal, the incubator’s site manager. “Turning an idea into a multi-million business takes a different mindset, discipline. Heck has that.”

In May 2015, Heck won the audience award at a competition called Venture Pitch Orlando. She also has made presentations to investors at several other events, including the Florida Venture Forum as well as the 1 Million Cups entrepreneurs forum in Daytona Beach.

She also spoke at a couple large national wedding planner conventions. She is one of the featured speakers in October at the Wedding Pro Convention in Las Vegas.

She signed her first two customers in the spring of last year.

“It’s excellent,” said Details Flowers client Jesus Rodriguez, owner of Raining Roses Productions, an Orlando florist/event planner. “No one has done anything like it. It’s so detailed and focused on the floral industry. I use it every day. It’s a big-time saver.”

Heck also plans to expand the Details Flowers website to include an access point for wholesalers to sell flowers to individual florists.

Heck said she plans to eventually move Details Flowers out of her home into an office space, but has not yet decided where. A lot, she said, depends on how the business evolves and what makes most sense as a result.

“I would like to grow our business out of the small Winter Park office and bring it home to Volusia County with the help of local investors," she said. "That's the goal."