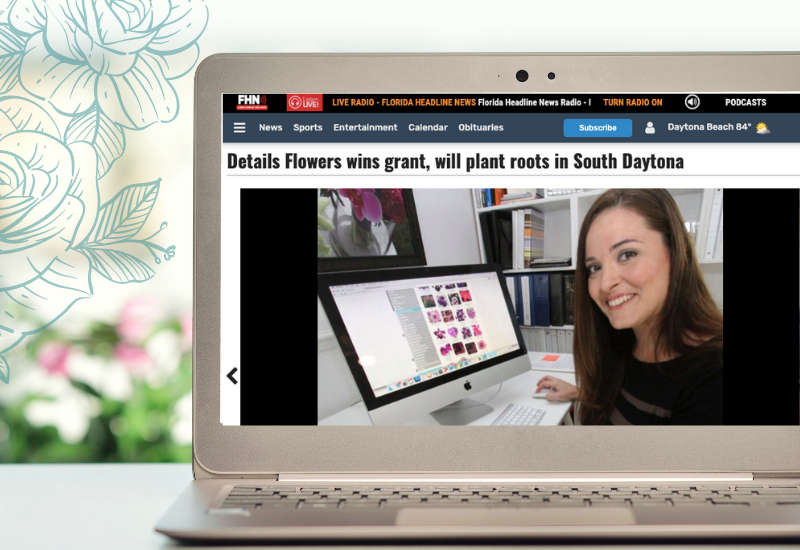 Corrine Heck, Founder and owner of Details Flowers, shows off the website for her business, which provides software that florists can use to keep track of inventory and customers, as well as status of deliveries.

Corrine Heck, founder and CEO of Details Flowers, has a new home for her growing startup company.

Heck, who graduated late last year from the Volusia County-funded UCF Business Incubator at Daytona Beach International Airport, was recently selected as the recipient of the inaugural entrepreneurship grant from All Aboard Properties.

The prize is a year of free rent for a 3,000-square-foot office space at the All Aboard Storage Center at Sunshine Park Mall in South Daytona.

Heck was selected from a field of 37 applicants, 10 of whom were chosen as finalists who were then asked to submit a video to describe what they would do with the space.

Andy Clark, the CEO of Port Orange-based All Aboard Properties, said he picked Heck because, “She had the most intriguing video. I knew of her from 1 Million Cups (the weekly entrepreneurs forum in Daytona Beach). She has great energy. I think she will be very successful.”

Details Flowers is a provider of a subscription-based software service that helps florists and special event planners keep track of clients’ orders and requests as well as monitor inventory and the status of deliveries.

Heck said she decided to share half of the space with another, yet-to-be-determined business to create an entrepreneurial “co-working” facility called The Greenhouse.

Clark, who owns several All Aboard Storage Centers throughout east Volusia County, intends to offer an entrepreneurship grant each year as a way to help promising startup businesses get off the ground.

“We were blown away at the number of applicants,” Clark said. “They were all so worthy that I wished we could give them all free space. We will do what we can to provide more free space for worthy startups and existing businesses.

“I want to fill up the rest of the vacant space at the Sunshine Park Mall as quickly as possible with similar very cool modern industrial office space and their ancillary needs like food and coffee vendors,” he said.

The build-out and first year rent for Heck will be free including utilities, Clark said.

Heck, who said she will be responsible for furnishing her half of the space, has an option to continue leasing the space as a paying tenant in subsequent years.

Heck said she hopes to move her business, which she is currently operating out of her Ormond Beach home, in September. She currently employs three part-time workers who have been primarily working out of their homes. Having a dedicated office space will allow them to work under the same roof along with student interns, she said.

Details Flowers, founded in 2014, has grown to 60 clients including two florists in Canada and one, who signed up for her service on Wednesday, from Australia. Locally, Details Flowers’ service is being used by a florist business in Port Orange called Flowers OMG, Heck said. Heck recently gave a presentation to venture capital investors in Orlando in what she said would be her first-ever institutional funding round. She said she would like to include investors from Volusia County in that round, which she said will be under $500,000 total.

She also is planning to give presentations on her business at upcoming national florist industry trade shows. She said her goal is to grow to 150 clients by year’s end and to at least 30 employees within four years.

As seen on News Journal Online - Click here to see the article!