The History of the Poinsettia

Poinsettia plants are native to Central America where they flower during the winter. The Aztecs had many uses for them including using the flowers to make a purple dye for clothes and cosmetics and the white sap was made into a medicine to treat fevers. Today, the sap is known as latex.

Because of a man named Joel Roberts Poinsett, the poinsettia became the well-known flower it is today. In 1825, he became the first American Ambassador to Mexico. Poinsett had greenhouses on his farms in South Carolina, and he became fascinated by the flora while visiting Mexico in 1828. He returned to South Carolina with some of the plants, where he began growing them and distributing them around surrounding areas.

Robert Buist, a Pennsylvania plantsman, spotted the bloom at the first Philadelphia Flower Show, and he was the first person to sell poinsettias under their scientific, or Latin name, 'Euphorbia pulcherrima'. Originally, they were marketed as cut flowers. They were only offered as complete plants for landscaping and pot plants in the early 1900s. 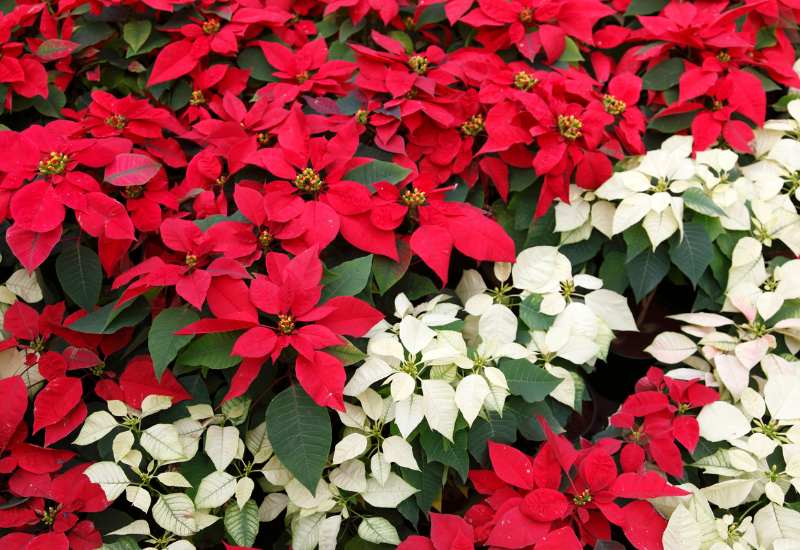 The Ecke family of Southern California was one of the first to offer them as full plants and they are now the principal producer of the plant in the United States. The poinsettia is now the most popular holiday plant, as well as the best-selling potted plant in the United States. Over 70 million poinsettias are sold in the six weeks leading up to Christmas, accounting for almost $250 million in poinsettia sales.

So, how does a poinsettia relate to the holiday season? Several stories and legends portray the poinsettia as a holiday icon in various parts of the world, but the most notable comes from Mexico.

The plant has been interpreted as a symbol of the Star of Bethlehem. One Mexican legend claims on Christmas Eve, a young girl, Pepita, could only give Jesus weeds as a present. The weeds bloomed into the magnificent red plants we know as poinsettias, also known as Flores de Noche Buena "flowers of the holy night". This is also why red and green are the colors of Christmas!

Want to learn more about other holiday floral symbols? Check out our blog all about the History of Mistletoe!