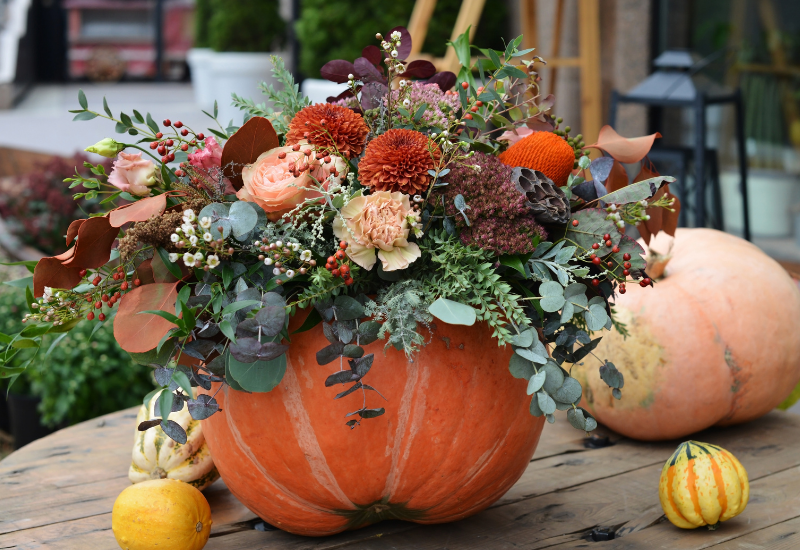 Let’s start off the list with a deadly carnivorous plant that’s similar to the venus fly trap.

This flower is exactly what the name suggests - a carnivore! It loves a live snack. The plant’s unique look resembles striking cobras and has purple-red appendages that look similar to a snake’s forked tongue or set of fangs.

Scientifically known as Darlingtonia californica, Cobra Lilies are actually great additions to your garden because they’ll eat and digest pesky insects that terrorize your plants!

Why are Lotus Pods so creepy to look at? They are known to cause anxiety with anyone who has trypophobia (visual fear of clusters of holes and bumps.) You’d never guess this is what’s left behind from the beautiful lotus flower bloom.

Scientifically known as Nelumbo nucifera, Lotus Pods are known to add instant intrigue to natural or modern arrangements. Add them as your focal point in your Halloween arrangements to send chills down the spine of anyone who lays eyes on it!

If you’re looking for something hauntingly beautiful rather than eerie, Black Baccara Roses are a perfect fit. These roses feature velvety, dark-red petals that are intentionally cultivated to appear autumnal in tone.

These mysterious beauties are one of the darkest roses in the world, and are perfect for theatrical floral arrangements that require a touch of drama.

A unique and odd type of chrysanthemum, Spider Mums feature elongated petals or florets that are tubular in shape. These petal tubes are hooked and curved at the ends, resembling spider legs. There are many different varieties of Spider Mums to choose from.

Their large and long blooms can be highlighted on their own in an arrangement with just a few other stems. Their stark and geometric shapes “spook” for themselves!

The Ghost Plant is a very uncommon type of flower. Scientifically named Monotropa uniflora, and also known as an Indian pipe, it does not contain chlorophyll. This means instead of generating energy from sunlight, it forms parasitic relationships to gain energy. This is why they can grow on dense, dark forest floors covered by leaves and debris!

Each stem of the plant bears a single, white flower. The white flower arches and points towards the ground, which ensures the pollens are protected from rainwater. A truly remarkable plant that breaks the mold.

This toxic plant is also known as White Baneberry; scientifically known as Actaea pachypoda. The “bane” in Baneberry is a clue that this is a poisonous plant, but is grown in gardens for its striking visual appearance. This plant produces white berries with deep purple “pupils” that give them the look of a doll’s eyes - along with clusters of tiny white flowers.

Beware when handling - make sure to use gloves and do not ingest anything from the plant, it could be fatal! The only species that are safe to consume the berries are birds.

Strikingly dark and gorgeous, it is said that people give Black Calla Lilies when they want to convey the idea of mystery and elegance, making them a perfect flower for Halloween. Calla Lilies are also known as trumpet lilies, and are hardy and frost-resistant.

Here’s a freaky fun fact about Calla Lilies, they actually house a series of flowers! There’s the single outside petal, but inside there is a yellow spike called the “spadix,” which is where you’ll find the group of tiny flowers clustered together - and they’re toxic! When using these lilies in arrangements, make sure to keep away from children and pets.

By far one of the strangest flowers on this list is the Amorphophallus titanum, also known as the Corpse Flower. This flower is the tallest in the world, and gives off an offensive smell, some say like that of a rotting corpse. The main reason it gives off a smell so horrid is because it wants to attract carnivorous insects that feed on the dead for pollination.

This gigantic flower requires 7-10 years of vegetative growth before blooming for the first time! After the first bloom, some are known to bloom more frequently (every 2-3 years) and some will take another 7-10 years to bloom again.

This pretty little plant may look harmless but as the name suggests, can actually be deadly on ingestion. The berries are extremely poisonous and even chewing on one of the leaves can be fatal. The only species safe from this plant are grazing horses, cattle, sheep, rabbits and goats.

The scientific name of this plant is Atropa belladonna, which has a great tale of caution behind it. Atropine’s name comes from “Atropos,” one of the three Greek fates. Legend has it, Atropos literally has your life in her hands, as she snips the final thread of your life’s tapestry, causing you to meet your death. Very appropriately named!

Last but definitely not least, is the oh-so-eerie Black Bat Flower, scientifically known as Tacca chantrieri. These flowers are a part of the orchid family, and can also differ in colors such as white and red.

The unusual appearance of these flowers will stop you right in your tracks. The black flowers are somewhat bat-shaped, with long cat-like whiskers that grow up to 28 inches long. They bloom from late summer through fall, often flowering for Halloween.

We hope you learned something new from this list of strange and stunning plants and possibly gathered some ideas for making creative Halloween floral arrangements. We definitely learned nature is weird! But in a beautiful and mysterious way, of course.

Wishing everyone a safe and fun Halloween this year!

Feast Your Eyes on These 5 Striking Thanksgiving Floral Centerpieces